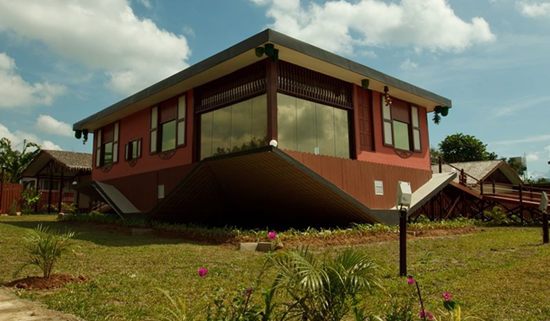 They look like something created by magic, seemingly defying all sense. Perhaps an unbelievably powerful tornado has flipped them onto their roofs - but that still doesn’t quite explain the lack of detritus and damage to their often incredibly detailed facades. 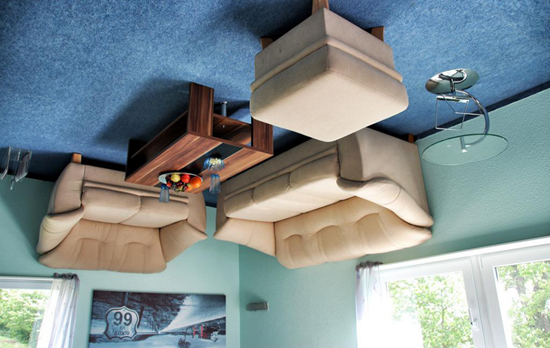 Haus-Kopf-über in Putbus, Germany. Image: Michael Urspringer.
In fact, of course, no mysterious means or natural disasters were responsible for bringing these ten stunning upside-down houses into being - just a healthy dose of imagination and considerable design and construction skills. Some were created for the sake of art, some for fun and others to make a serious point, yet regardless of how and why they exist, they’re all quite remarkable sights. 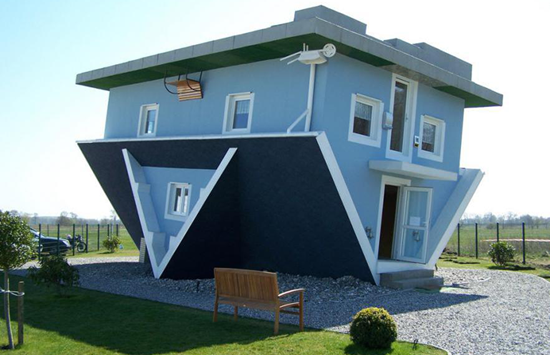 Image: backkratze/Wikimedia Commons
In a move to boost visitor numbers to the German coastal resort of Trassenheide, Polish architects Sebastian Mikiciuk and Klaudiusz Golos were commissioned to develop what would become this striking pastel-hued dwelling. The resulting steel-framed structure seems to bear a certain resemblance to a traditional Cape Cod cottage - albeit one that is standing the wrong way up. 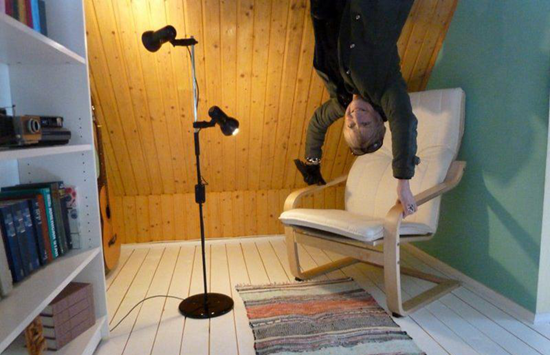 Image: Die Welt Steht Kopf
The baby-blue building is known as the “Die Welt Steht Kopf,” which translates as “the world stands on its head.” And the topsy-turvy theme is also all present and correct on the inside, with furnishings like chairs and TV stands seemingly sticking to the floor - or, depending on one’s perspective, the ceiling. Die Welt Steht Kopf was constructed in 2008, making it the inaugural upside-down house to have been created in Germany. [Die Welt Steht Kopf website (in German)] 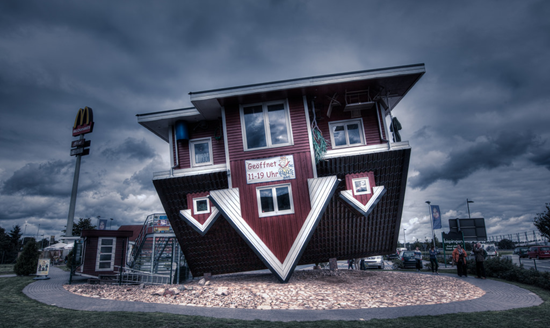 Image: Atrista Vig
Das Verruckte Haus - which aptly translates from German as “the wacky house” - has a bizarre history to match its strange appearance, as it was initially constructed in a zoo more than 100 miles away from its current Bispingen location. Tradesmen Manfred Kolax, Gesellse Splettstößer and Gerhard Mordhorst were tasked by investor Dirk Oste to create the timber-framed, jaunty-angled tourist attraction, where everything inside has also been turned on its head. 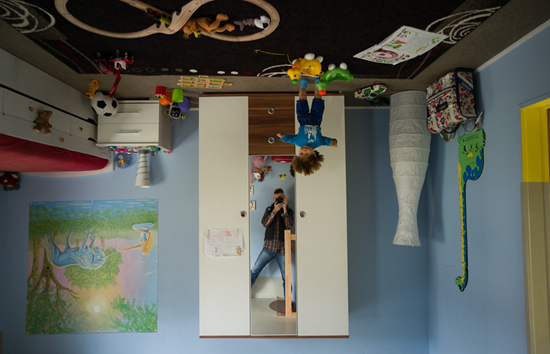 Image: Claus Thoden
Interestingly, the odd abode was apparently actually put together the right way up before being turned upside down upon its arrival in Bispingen, where it finally opened to the public in 2010. And no corner was cut in its making, either: the attention to detail within even extends to a sewing kit used to keep the bedspreads in their correct - that is, upside-down - position. [Das Verruckte Haus website (in German)] 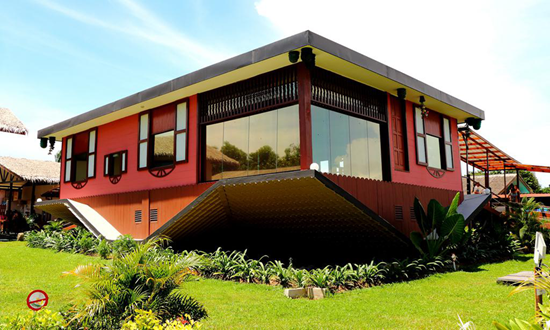 Image: Jensen Chua
Super-reflective floor-to-ceiling windows help make Malaysia’s Rumah Terbalik surely one of the world’s most aesthetically pleasing upside-down houses. This is also Southeast Asia’s only overturned abode - its name translating from Malay literally as “reversed home” - and, understandably, plenty of folks come to the modest town of Tamparuli to see it. 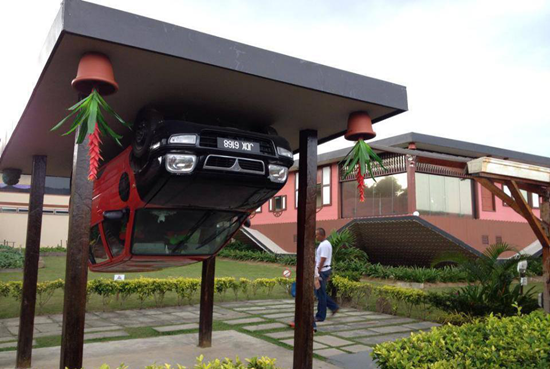 Image: Rumah Terbalik Facebook
The upside-down adventure begins at the site’s open-air garage - where a flipped vehicle is seen clinging on overhead (pictured above) - before continuing inside the abode, which notably boasts Sabah-style furniture and decoration. Visitors must go around the Malaysia Book of Records-listed house with a tour guide; however, it should be noted that interior photography is frowned upon - so friends and family envious of the trip there should get the full effect by traveling to Tamparuli themselves. [Rumah Terbalik website] [Rumah Terbalik Facebook] 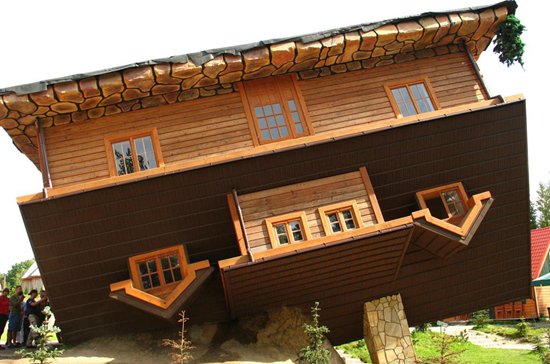 Image: Dirk Wegman
Part of Szymbark’s Centre for Education and Regional Promotion, this eye-catching flipped house with its timber-covered exterior is the only upside-down creation of its kind in the whole of Poland. Furthermore, the eye-catching construction was created with an intriguing message in mind - and this meaning becomes decidedly more apparent when venturing into the house, where the topsy-turvy theme continues. The décor there harks back to Poland’s past days as a communist nation, complete with propaganda messages blaring out through the TV. 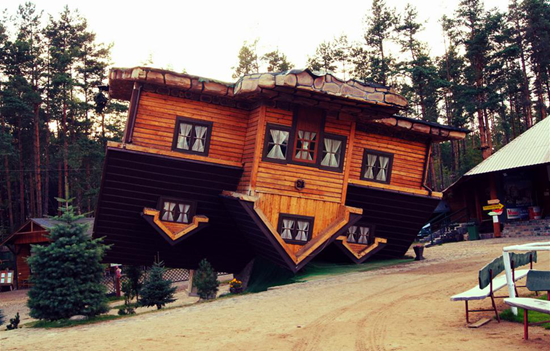 Image: φωτογράφος
The upside-down nature of the building is also key to its purpose. The designer, Daniel Czapiewski, intended the house to act as a metaphor for the confusion experienced throughout Poland after the Soviet Union’s collapse at the end of 1991, when life as many knew it in the country was also turned on its head. Since its completion in 2007, moreover, the unusual structure has discombobulated lots of visitors, much as it did those who worked on its construction. 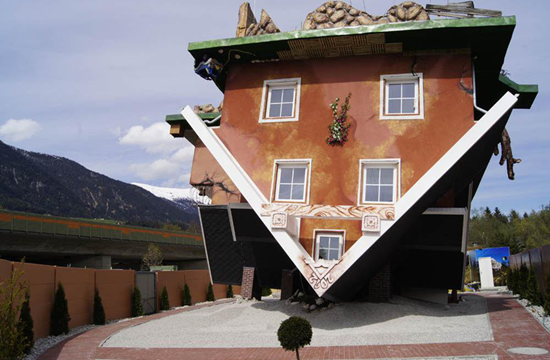 Image: Haus steht Kopf
Terfens, Austria’s Haus steht Kopf - literally “house standing on its head” - looks from outside like it may have gotten a little damaged from the flipping process. Stepping inside, however, reveals an unspoiled interior that takes in a living room, a big bathroom and a child’s bedroom - all oriented upside down. Perhaps the main attraction here, though, is the garage, where a VW Beetle hovers precariously above visitors’ heads. 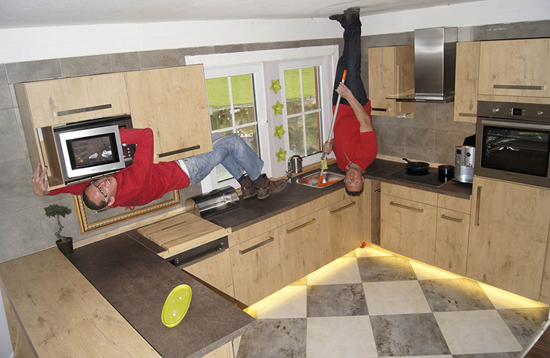 Image: Haus steht Kopf
Marek Rozhanski and Irek Glowacki - another pair of Polish designers - finished Haus steht Kopf inside eight months, with the bizarre building opening ready for locals and tourists to explore in May 2012. And for those who have always wanted “to see the world from the perspective of a bat,” as the house’s website describes the experience, it’s a must-visit. 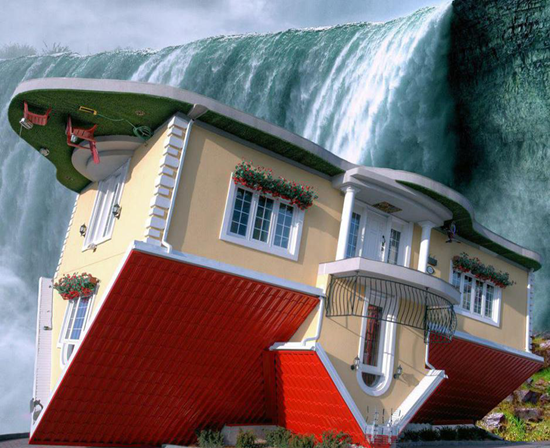 Image: Upside Down House Niagara Falls/Facebook
If it weren’t for the remarkably intact flowerpots on the windowsills, as well as the neatly arranged garden furniture, this house could almost have fallen from the top of Niagara Falls and washed up onto a nearby street. Some beautifully manicured greenery also adds to the dwelling’s picturesque appeal; indeed, it’s virtually pretty enough to move into. 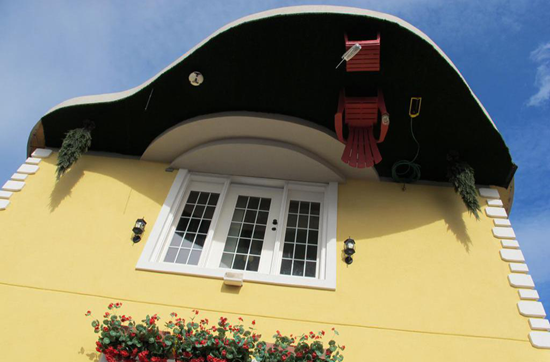 Image: Cle0patra
The flipped-on-its-head motif continues in the 2012-opened home’s interior; in fact, in one room there’s even an upside-down TV switched on for visitors to watch. Poland native Marek Cyran was behind the project, although he also received some assistance from Daniel Czapiewski - the man responsible for the creation of the upside-down edifice in Szymbark. Interestingly, Czapiewski first visited the Canadian city of Niagara Falls - where the house is situated - with the aim of showing off a sizable collection of LEGO. Perhaps he saw the potential there to swap his toy building blocks for the real thing. 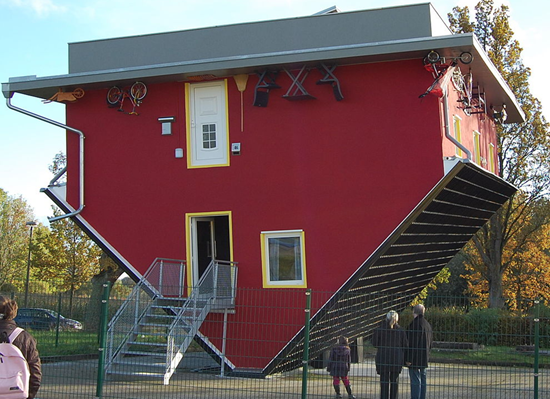 Image: Olaf Meister/Wikimedia Commons
The 2010-opened Haus-Kopf-über, or the “house-head-on,” is to be found on the German island of Rügen. Spread over three levels, the upside-down property is part of the town of Putbus’ Pirateninsel amusement park - which, as even non-German speakers might be able to discern, has a distinct pirate theme. And though there’s no word as to whether anything in the strikingly red house features parrots, peg legs or gold, one thing is for sure: it’s entirely topsy-turvy inside as well. 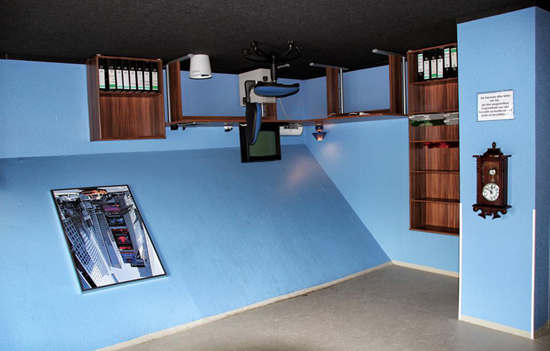 Image: Michael Urspringer
Moreover, although the Haus-Kopf-über’s location suggests that it was built with kids in mind, inside there is nevertheless a rather grown-up study space, not to mention a sensible-looking living room without a plaything in sight. And needless to say that children both big and small like to pose for somewhat off-the-wall - or, indeed, off-the-ceiling - photographs here. [Haus-Kopf-über website (in German)] 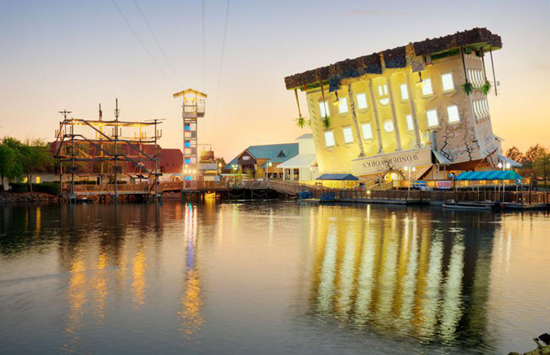 Image: WonderWorks
Less overturned house, more flipped science centre, WonderWorks has an interior that belies its seemingly cracked, uprooted exterior by being the right way up. This is perhaps just as well, though, considering the fact that the 2011-opened attraction houses a ropes course, a space shuttle simulator and a bed of nails - the latter of which just wouldn’t work upside down. Plus, before even entering the Myrtle Beach, South Carolina venue, visitors may feel that the whole structure is on the verge of toppling over entirely - this thanks to hidden speakers playing creaking sounds outside. 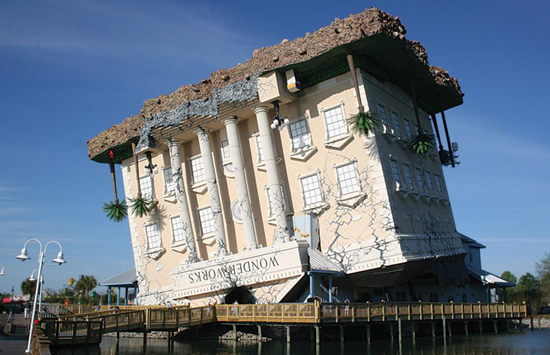 Image: WonderWorks
As for how the ten-story, 50,000-square-foot building got here, well, there’s a story about that. Formerly used as a highly secretive research lab in the Bermuda Triangle, the structure was carried over to the U.S. in a man-made cyclone created as a test by scientists. Or so we’re told. 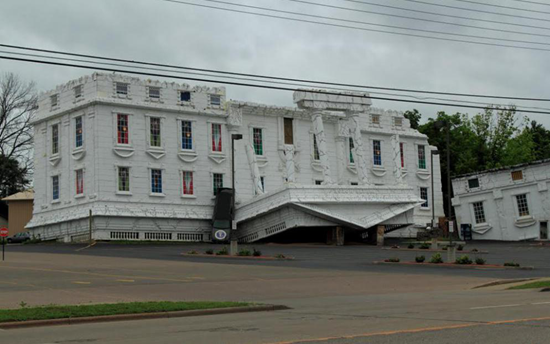 Image: fred089/Panoramio
Remarkably, Wisconsin Dells doesn’t play home to the only upside-down White House in the U.S.; there’s also one in Orlando and another in Tennessee. However, this version of the famous building at the area’s Top Secret Inc. attraction is particularly notable for its topsy-turvy interior - one which, incidentally, features an offbeat conspiracy theory theme. 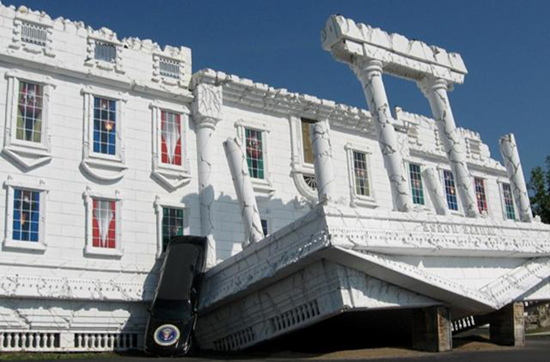 Image: Wisconsin Dells
Visitors here are shown around by tour guides who reveal beings that have so far apparently been kept very hush-hush - like a volatile creature made out of moon rock and a roaring T-Rex in a pen. Even from the outside, though, the downright apocalyptic vision of the tipped-over presidential residence is pretty cool all by itself.

Image: Rafael Ortega Díaz/Wikimedia Commons
An interactive attraction in the Mallorcan resort of Magaluf, the Tibetan-style House of Katmandu is part of Katmandu Park and sits upside down in grounds that also boast a beaming Buddha statue and adjacent pond. Inside the house, though, things return to being the right way up, and a maze, a shark attack game and a spinning tunnel - all linked via a story featuring a yeti and a magic jewel - can all be found within. 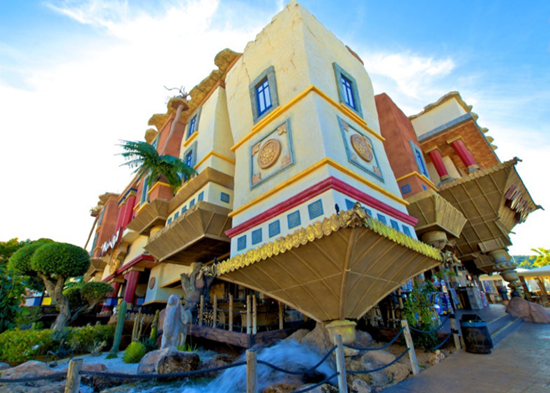 Image: No Frills Excursions
The house was the first attraction built at Katmandu Park back in 2007, with the other mythical-styled attractions springing up around it later - testament, perhaps, to the power of the upside-down house. And it’s certainly a good-looking construction; just check out those brightly coloured pagodas.