10 International Restaurants with Amazing Architecture
By Nikkitha Bakshani, The Daily Meal, 23 April 2015.
Architectural masterpieces are probably best when visited before or after a meal, because you can usually expect a tour that includes a lot of walking and educational information. But what if you could go to these masterpieces for a meal, as opposed to before or after? You’re about to learn that amazing architecture doesn’t just have to be for opera houses. Here are 10 restaurants around the world that are housed in buildings with amazing architecture.
If a restaurant is ambitious with their architecture, you can pretty much guarantee they will be adventurous with their food - unless they are housed in historical buildings and stick to traditional food. Either way, none of these restaurants use their architecture as a ploy to distract you from mediocre fare. The surroundings and the food work together to satisfy - not distract - you.
We found the items on this list by looking through Architectural Digest’s notable restaurants, as well as perusing our list of 25 hard-to-get-to restaurants around the world, because we (rightly) assumed that remote restaurants often have exterior design that makes them stand out from their uncrowded surroundings. While we toyed with the idea of limiting these restaurants to ones located in buildings that look modern and, well, cool, we believe that good architecture integrates the old and the new, the historic and the inventive.
In this article, “amazing architecture” refers to exterior design; we’ll leave restaurants with amazing interior design for another article. However, some restaurants in this list, like 1135 A.D. in Jaipur, are lucky enough to have both. Some restaurants in this list are a part of hotels or palaces that have amazing architecture, but others, like Mexico City’s Tori Tori, are landmarks of their own. While we were tempted to include buildings like Norway’s TrollVeggen Restaurant, the fact that the establishment is a tourist centre and cafeteria rather than a table-service restaurant made us exclude it from this list.
1. 1135 AD (Jaipur, India) 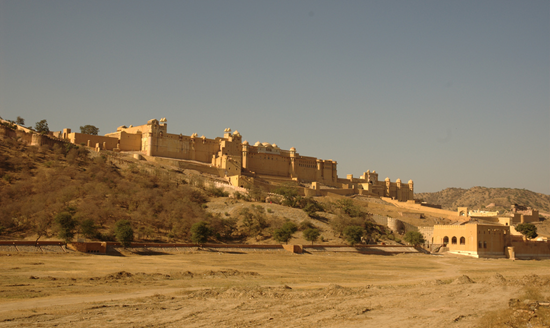 Credit: Honza Soukup/Flickr
Located right on the top of Fort Amer, a UNESCO World Heritage Site that sits on top of a mountain and looms over the “pink city” of Jaipur, 1135 AD serves North Indian food (try the dal makhani with the Rajasthani khuba roti) as rich and decadent as its décor, which models itself after the dining rooms of Rajput maharajas. Though technically a fort constructed of red sandstone and marble, the fact that it has four levels, each with its own courtyard, makes people often refer to it as a palace. [1135 AD Facebook]
2. Britta’s Restaurant (Harads, Sweden) 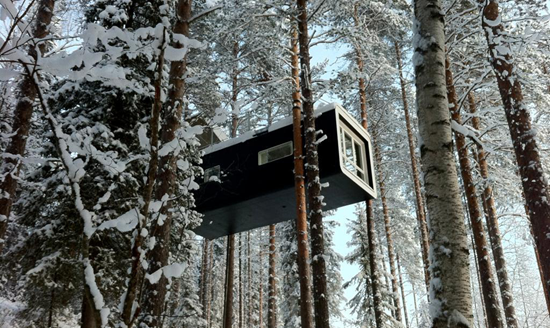 Credit: dan.nerd/Flickr
Britta’s Restaurant, located in Sweden’s Treehotel, an architectural masterpiece consisting of mirror-like boxes suspended among trees, promises unpretentious food that has nothing to do with “Michelin stars, white table clothes and oyster gloves.” You’re likely to find reindeer on their ever-changing menu, as well as delicious homemade ice cream with cloudberries. Treehotel is probably one of the best places in the world to watch the Northern Lights.
3. Café Kureon (Toyama, Japan) 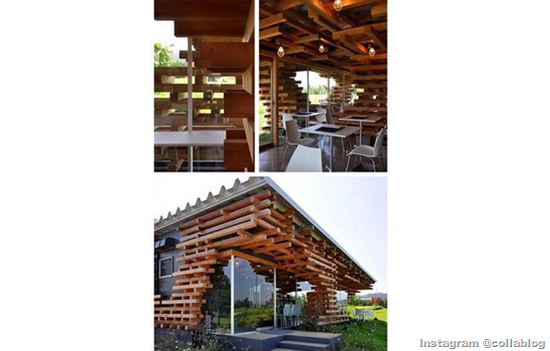 Café Kureon is a Jenga-like structure surrounded by sparse green meadow. Little can be found about the food in what many Japanese design blogs call “a cosy eatery,” but that might be because the quality of the food just does not matter in a building as interesting as this one.
4. Church Brew Works (Pittsburgh, Pennsylvania, USA) 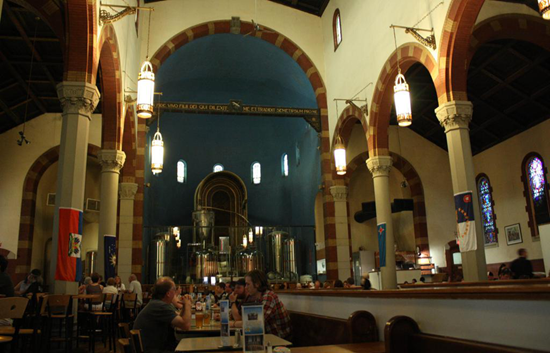 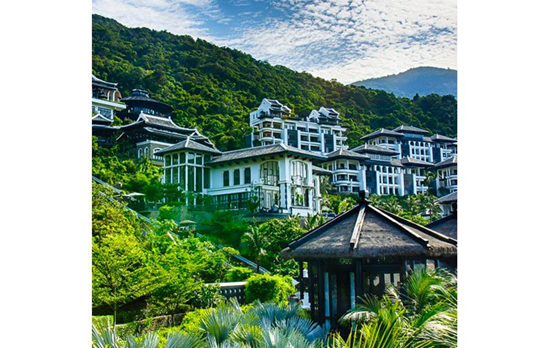 Credit: Instagram @danangfinder
With long French windows and a pagoda-style roofs tucked into the side of a mountain by the East Sea, Vietnam’s Danang Sun Peninsula Resort is a sight to behold - and three-Michelin starred chef Michel Roux's fare at the hotel’s La Maison 1888 restaurant ensures that your eyes are not the only senses that will be engaged. Start with the blue crab velouté and tapioca pearls with lime-scented mascarpone ravioli; with entrées like pan-fried red snapper with wild rice and creamy galangal sauce or roasted Challans duck with mango and peppercorn-flavoured jus, your meal will be divine.
6. Mestizo Restaurant (Santiago, Chile) 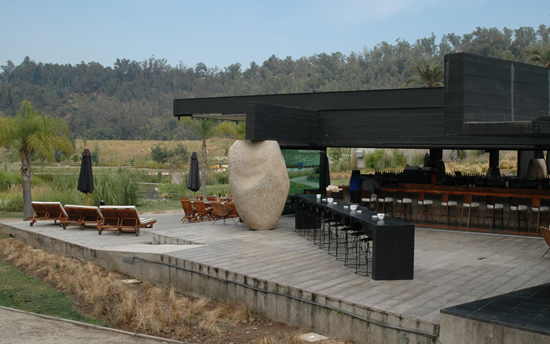 Credit: John Zacherle/Flickr
Santiago’s Mestizo Restaurant, with dark, sharp exterior consisting of a roof that’s much bigger than the actual restaurant, serves excellent Peruvian and Chilean cuisine aside a fantastic view of the Parque Bicentenario. The menu relies heavily on seafood; and you’ll rely heavily on the pisco sours to keep you warm on those chilly, high-altitude nights. [Mestizo Restaurant website (in Spanish)]
7. The Orangery (London, UK) 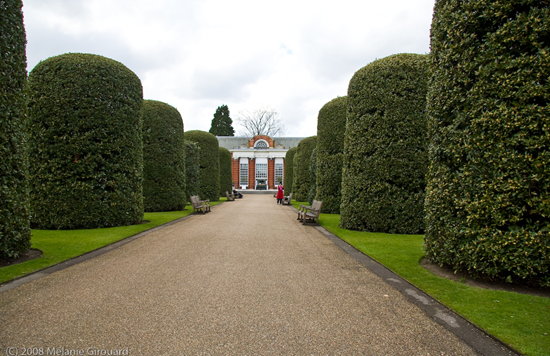 Credit: Mélanie/Flickr
With all the sleek, modernist buildings out there that just so happen to have restaurants inside them, The Orangery - a high-ceilinged pavilion tucked into London’s Kensington Gardens - might seem a bit old-fashioned. The refined Georgian structure doesn’t even have the baroque touches of old buildings one might find in continental Europe, but it captures the soul of Downton Abbey-era London. Awash in natural sunlight (when London’s generally grumpy weather is behaving itself), The Orangery serves some of London’s best (and reasonably priced!) afternoon high tea.
8. The Redwoods Treehouse (Auckland, New Zealand) 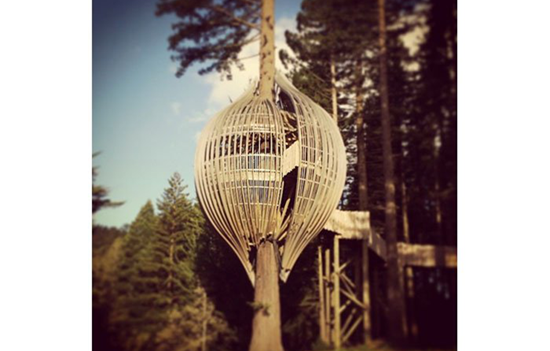 Credit: Instagram @redwoodstreehouse
When New Zealand’s Redwoods Treehouse was the Yellow Treehouse Restaurant, the onion-shaped pod of a restaurant let customers walk in for meals, but now it only accommodates parties for private dining. Nevertheless, it is an onion-shaped pod of a restaurant suspended in between tall redwood trees.
9. The Rock Restaurant (Zanzibar, Tanzania) 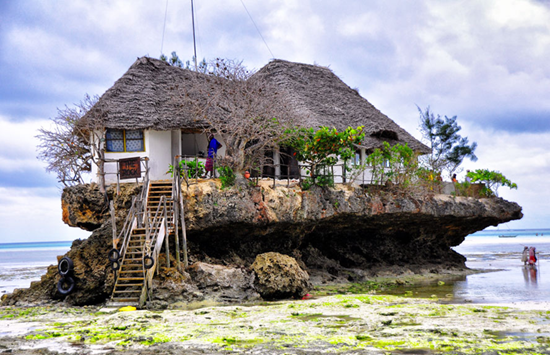 Credit: Rod Waddington/Flickr
A boat ride away from the shores of Michanwi Pingwe beach in Zanzibar, The Rock Restaurant is a tiny, straw-capped hut that serves just-the-right-amount-of-frills seafood, like a gnocchi with vanilla-spiced crispy prawns. The tiny but well-curated dessert menu only has pineapple flambé and fruit salad. The simple structure looks magnificent when surrounded by the sea, which captures many shades of blue and green.
10. Tori Tori (Mexico City, Mexico) 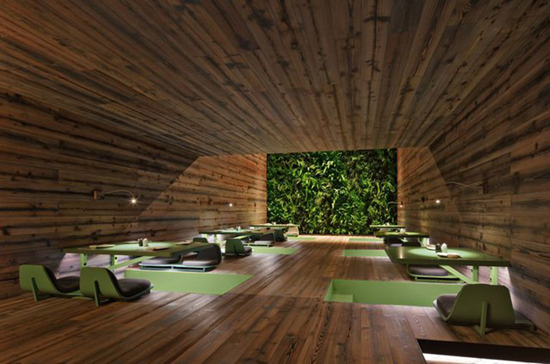 Credit: wickerparadise/Flickr
At night, the psychedelic, latticed exterior of Tori Tori in Mexico City shines violet. The sushi restaurant, which has indoor as well as patio seating, is considered one of the best in Mexico - it’s symbolic of the city’s Polanco area, which is known for its fine dining. [Tori Tori website (in Spanish)]
Top image: The 1135 AD Restaurant. Credit: Mount Shivalik Hospitality.
[Source: The Daily Meal. Edited. Top image and some links added.]