A Commentary On The Fall Of Tadmur/Palmyra 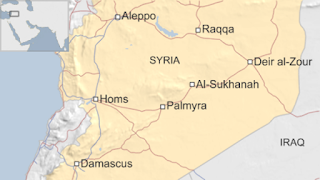 WNU Editor: I have posted (in its entirety) the following analysis/commentary by reader Mlacix on the fall of Tadmur (Palmadya/Palmyra).

Mlacix: Whatever the US strategy against IS we will never know it, or at least we cannot be sure that what we know is true or not, but we can try to foresee the tendencies to see our expectations meet with the upcoming events.

I’m not a fan of US military strategies, because they mixed with politics way too much for my taste. But I need to agree that the war against IS is going well. US just want to let others fight this war. Most of them got support from the US, and in support I mean weapon sales. Upon the sales on the current and upcoming even more polarised Arab world the possibility of a real war between two states (exp.: Iran – SA) rising. US simply let others fight while selling them weapons, and make sure every side will be weakened.

IS will be destroyed, it’s just a matter of time, and they will remain in the history as destroyer of values, but in the history they are not alone with this title. Recent reports say IS is stronger than ever and cannot be stopped, however I see it differently. First let see Palmadya (or just call it Tadmur).

Tadmur is not important as the news reports. It’s halfway between Der-er-Zor and Homs/Damascus, out of nowhere, in the middle of desert. The town has no value other than the ancient buildings and so, but in a war to survive, the least you care is some old building. The surrounding area is a bit different, and that’s under reported. Natural gas pumping stations are in high numbers in the area as well as mines and other resources. But some Airbases are also in the area and that’s the key here. After the fall of Tabqa Air Base some units were repositioned the Palmadya area, for example to T4 Air Base. T4 is one of the most important AB of SAF, because their most advanced aircrafts are stationed here, like the SU24.

Defending Tadmur would be a hard task for SAA, however they pushed out IS after their first offense. Because of the surrounding hills and the very open desert terrain it’s hard to defend the city itself, even if in urban environment the force ratios change a bit. The real reason why SAA retreated is because they had no capable fighting forces available here. When Idlib fallen SAA quickly sent Tiger’s forces to there, but earlier Tiger fought in Tadmur area. IS just seen the possibility and step forward to the weak frontline. SAA following it’s strategy of not fighting if they can’t win the battle. SAA retreated to avoid higher casualties and IS won. But this won is not made by fighting, more like with strategy.

News only came from the Battle for Tadmur, but there are other IS offenses in Syria which not get as much attention. Kuweres Air Base in Aleppo is under IS (and previously rebel) siege for a few years or so now. After lots of offenses, IS made another just one-two weeks ago, but they failed again, and suffered high casualties. Still in Aleppo as reports said IS started an offense against the SAA encircling “wing” which encircled the city from East and North, and IS attacked the Industrial area here. As far as I know they yet been repelled but who knows when they try with a new attack. IS reportedly in Suweira (South from Damascus, East from Daraa) and from the direction of Tadmur they keep advancing. The last month was intense in this part of the country. Meanwhile Kurds and SAA forces pushed out IS forces in Hasakia, up north, North from Der-er-Zor.

The war in Syria is seems to go not so well for SAA now, but this is just a critical moment for them. They need to keep stand and reposition their forces well. That’s why they made the unexpected offensive at Qalamun to clear out those positions and allow the stuck unit’s to be sent to more critical frontlines. If they can handle the Idlib offensive and stop the rebels there, and they can reposition to face IS coming from the east they can stand for a very long time and can get our as winners. But it’s will be a hard time for them.

That was Syria, but what going in Iraq, is something different. To be honest I don’t think the fall of Ramadi is important. The number of lost vehicles and other equipment are more so, but they city itself is not really. Why I think so? It’s sometimes needed to let the enemy advance and let them into a vacuum. By this you can lower the “density” of their forces which mean better force ratio on a fight. The fall of Ramadi was needed in my eyes, even more with the later announcement of Shia unit’s will be sent to Anbar. I remember you posted a news that Sunnis are concern on what comes next. Well as long as IS built up mainly Sunni extremist and as long as Sunnis can’t defend themselves against IS they can shut up on who to come help. At this point we will actually see how Shia militias will handle to be in a Sunni dominant area. I believe they can handle the situation and not go on rampage. The more important battle in Iraq will be when Baji being freed and from this direction the militias make an advance toward South West and cut IS’s lines on the back.

Even if I’m still very young, and my not see enough living history with my eyes, but I find thing worrisome. The whole Arab world is being polarised on the Sunni – Shia line, with two leading country, Iran and SA. As long as US can get out of the fight and let them weaken each other the US strategy works. I’m not into conspiracy theories, don’t like that all, but 6 out of 10 country in the Middle East is at war so things just getting serious. Anyway that’s how I see things. Instead of a comment on your blog I just send it directly to you. Hope you find it interesting. Bagaimana Menarikkan Article Pada Hari Ini . TIPS AND INFORMATIN RESORCES.Jangan Lupa Datang Lagi Untuk Membaca Article Yang lebih Menarik Pada Masa Akan Datang/
Label: information on how to suicide