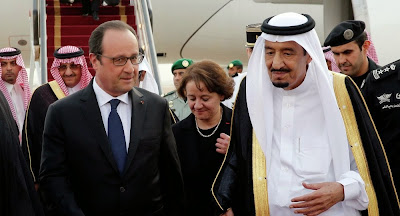 France and Saudi Arabia believe that any future nuclear accord between Iran and six major powers must be robust, verifiable and no threat to Tehran's neighbors, the two countries said ahead of a summit in Riyadh on Tuesday.

Saudi Arabia invited French President Francois Hollande, whose country is deemed to have the toughest stance among the six world powers negotiating with Iran, to Riyadh to discuss regional issues with Gulf Arab leaders who fear a rapprochement with Tehran could further inflame the region.

"France and Saudi Arabia confirmed the necessity to reach a robust, lasting, verifiable, undisputed and binding deal with Iran," Hollande and the new Saudi King Salman said in a statement after meeting on Monday.