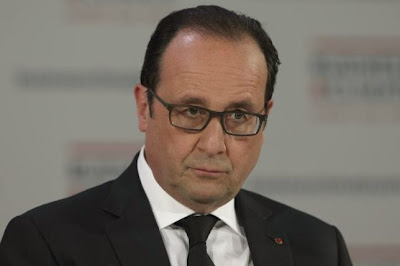 French President Francois Hollande called for a new international push for a peace deal in Syria on Friday, saying the fall of Palmyra to Islamic State showed President Bashar al-Assad was gravely weakened.

"Once again we call for the preparation of a new Geneva," he said after an EU summit in Riga, referring to earlier conferences aimed at brokering a transition from Assad to Western-back rebels who have also lost ground to Islamic State.

"With a regime that is clearly weakened, and with a Bashar al-Assad who cannot be the future of Syria, we must build a new Syria which can be rid, naturally, of the regime and Bashar al-Assad but also, above all, of the terrorists.

WNU Editor: Negotiate with who? The Syrian regime is not interested in giving up their power. The Free Syrian Army is too weak and fragmented to make a difference. Al Qaeda linked Al Nusra and the Islamic State are gaining ground and territory and have no interest in negotiating. Iran, Hezbollah, Russia, Turkey, and Saudi Arabia .... they all have their own agendas in Syria .... and they are not going to change their positions on Syria. So Mr. French President .... negotiate with who? Bagaimana Menarikkan Article Pada Hari Ini . TIPS AND INFORMATIN RESORCES.Jangan Lupa Datang Lagi Untuk Membaca Article Yang lebih Menarik Pada Masa Akan Datang/
Label: information on how to suicide