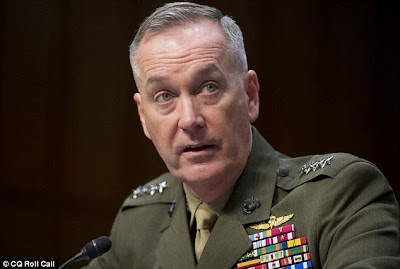 * President Barack Obama due to announce Joint Chiefs of Staff chairman
* Expected to pick Marine General Joseph Dunford, who had pivotal role in leading the Afghanistan war coalition between 2013 and 2014
* Dunford served in Iraq for two years and was nicknamed 'Fighting Joe'
* Obama is due to make announcement today, and Gen. Paul J. Selva is reportedly being tapped up to be deputy to Marine General Dunford

President Barack Obama is to choose a commander who led the Afghanistan war coalition during a key transitional period as his next chairman of the Joint Chiefs of Staff.

According to US officials, Obama will nominate Marine General Joseph Dunford Jr. to the post to succeed Army Gen. Martin Dempsey, who will have served four years as chairman.

Obama plans to make the announcement at the White House Tuesday, said officials who spoke anonymously. Dunford is expected to be easily confirmed by the U.S. Senate.

Military And Intelligence News Briefs -- May 5, 2015
Gen. Joseph Dunford to Be Nominated as Next Chairman of Joint Chiefs of Staff -- ABC News

These generals could replace Gen. Joseph Dunford as the next top Marine -- Washington Post

Is This Proof That The US Air Force Can Aerially Refuel Stealth Drones? -- Foxtrot Alpha

Pentagon: Texas has nothing to fear from upcoming military exercise -- McClatchy News