Menu
Home » booms » President Obama: If Iran Develops A Nuclear Bomb It Will be 'My Name' On It

President Obama: If Iran Develops A Nuclear Bomb It Will be 'My Name' On It 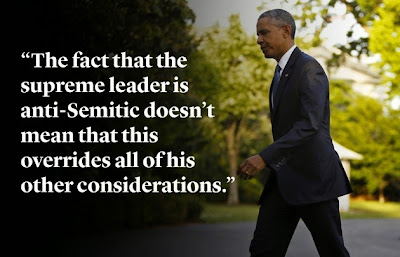 President Obama, in an interview published Thursday, says he has a "personal interest" in making sure Iran does not acquire a nuclear weapon.

“Look, 20 years from now, I’m still going to be around, God willing. If Iran has a nuclear weapon, it’s my name on this,” Obama told The Atlantic, referring to the pending nuclear deal between Tehran, Washington and five other Western powers.

"I think it’s fair to say that in addition to our profound national security interests, I have a personal interest in locking this down," Obama added.

WNU Editor: President Obama is right about this .... Barack Obama: Iranian bomb would have 'my name' on (The Telegraph)