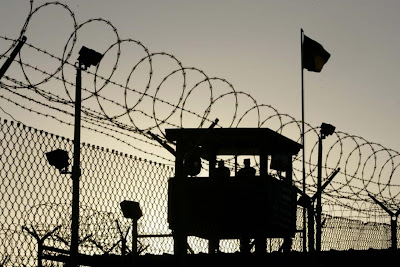 Retired Supreme Court justice John Paul Stevens said this week that the government should compensate detainees still being held at Guantanamo Bay even after authorities determined that they did not pose a threat to the United States.

Stevens’s call to give reparations to dozens of detainees at the U.S. military detention center in Cuba comes as the Pentagon is racing to move these inmates ahead of possible congressional action that could restrict transfers.

In a speech Monday, Stevens pointed to the detainees who have already been approved for a transfer out of Guantanamo Bay, saying that some or all of them “are entitled to some sort of reparation.”

There are 57 inmates in Guantanamo who have been approved for transfer out of the 122 detainees still being held.

WNU Editor: John Paul Stevens is a retired Supreme Court justice and he is entitled to his own opinion .... but any politician who agrees with this will probably be destroyed when he or she runs for re-election. Bottom line .... because of the unbelievably horrific crimes that some of these detainees have done (even though some have been released i.e. the Taliban 5) ....  the U.S. public is not interested in giving money to these individuals even though a "moral case" could be done that some of them may deserve some compensation for being unjustly imprisoned. Bagaimana Menarikkan Article Pada Hari Ini . TIPS AND INFORMATIN RESORCES.Jangan Lupa Datang Lagi Untuk Membaca Article Yang lebih Menarik Pada Masa Akan Datang/
Label: Amarna