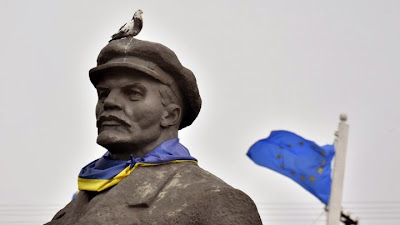 A statue of Lenin in Slavyansk, eastern Ukraine. Symbols of Ukraine's Soviet past have become collateral victims of the struggle over the country's future. © Sergei Supinsky, AFP
The Guardian: Ukraine bans Soviet symbols and criminalises sympathy for communism

Two new laws that ban communist symbols while honouring nationalist groups that collaborated with the Nazis have come into effect in Ukraine, raising concerns that Kiev could be stifling free speech and further fragmenting the war-torn country in the rush to break ties with its Soviet past.

The first law “on the condemnation of the communist and Nazi totalitarian regimes” forbids both Soviet and Nazi symbols, making something as trivial as selling a USSR souvenir, or singing the Soviet national hymn or the Internationale, punishable by up to five years in prison for an individual and up to 10 years in prison for members of an organization.

WNU Editor: For most Ukrainians .... they have far more pressing matters than reading up on news reports that Soviet symbols have been banned and that sympathy for Communism is now criminalized. But honoring nationalist groups that committed ethnic cleansing and/or allied with the Nazis during the second world war .... that is having an impact outside of the country. Kudos to the The Guardian for at least reporting on it .... this is another one of those stories that most Western media outlets have choose to ignore or underplay. Bagaimana Menarikkan Article Pada Hari Ini . TIPS AND INFORMATIN RESORCES.Jangan Lupa Datang Lagi Untuk Membaca Article Yang lebih Menarik Pada Masa Akan Datang/
Label: booms