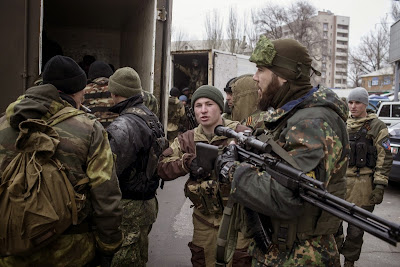 Pro-Russian rebels take their positions on a street, during what the rebels said was an anti-terrorist drill in Donetsk, March 18, 2015.
Reuters: Ukraine reports fresh casualties in east, OSCE sees violence spreading

One Ukrainian serviceman has been killed and eight wounded in fresh separatist attacks, the military said in Kiev on Thursday, as the OSCE security watchdog warned of a "worrisome" spread of violence in eastern Ukraine.

Fighting has lessened significantly since a ceasefire between Ukrainian forces and Russian-backed rebels was declared in mid-February, but both sides accuse the other of violations and casualties are reported almost daily.

"Fighting has not died down along a broad stretch of the frontline from Krasnogorivka to Svitlodarsk," Ukrainian military spokesman Oleksander Motuzyanyk said, referring to government-controlled villages to the west and north-east of rebel-held Donetsk city.

"The enemy is actively using heavy weapons ... The area of fighting is expanding," he said.